It is a big deal in America for families to get together for Thanksgiving. If people don’t have or don’t like their families, they do a “friendsgiving.” Since our hosts in Kosovo had never experienced this, we decided to cook a full Thanksgiving dinner in friendsgiving fashion and tell our holiday story. Typically the dinner is centered around a turkey, but neither Mark nor I like turkey so we decided to go with ham.

We searched the markets and stores in Prishtina for a ham, and found a lonely ham at the bottom of a cooler in a grocery store. We brought it back home, to our hostel, all proud until someone saw it and politely said “I don’t eat ham.” Unfortunately, we had completely forgotten that we were in Muslim-majority country, and many people don’t eat pork products.

Nonetheless, our hosts were very fun about it. They chalked it up to a cultural exchange and said there’s no better way to understand a people than to devour their food. I couldn’t agree more. So in good faith, Mark woke up early in the day and began dinner preparations.

Mark made a rosemary ham with cinnamon. The spices available were considerably more limited than either of us had experienced until this point, so it was a very simple recipe, but we got lucky with rosemary and that is really what made this ham absolutely fantastic. (Mark’s made it three times since we’ve been home!)

We had originally planned for 7 people as that was about as much as we thought the ham could feed. But because the aroma of the cooking had filled the entire hostel, other people wanted to hang out and eat food with us instead of going out. And I can’t blame them, the food was irresistible. 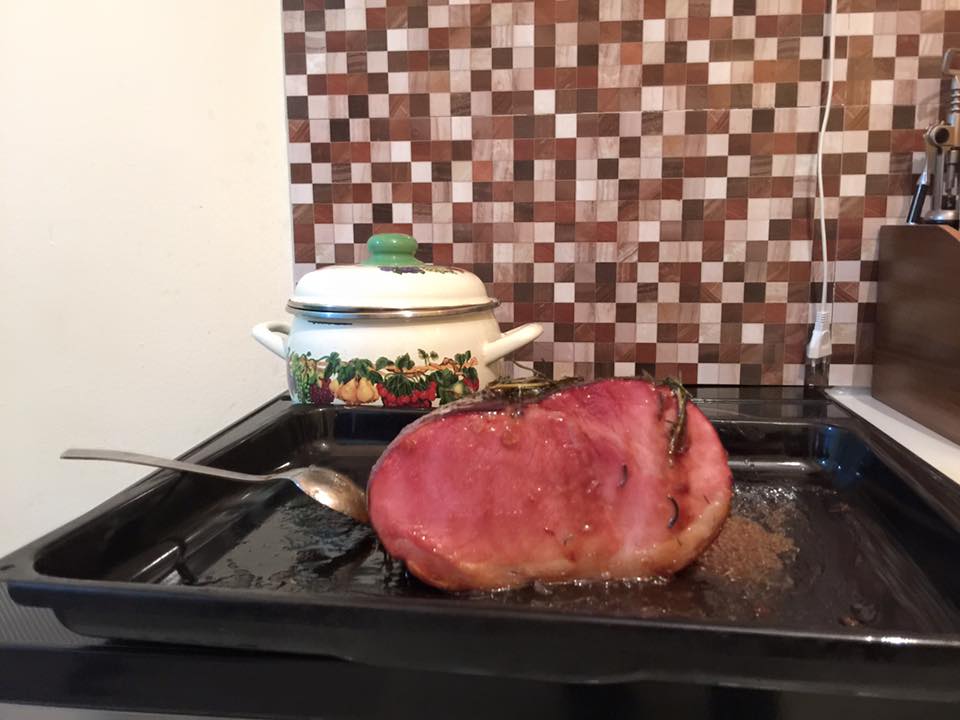 I felt like Jesus feeding the 5,000.  Miraculously, we had food for everyone! Hand-mashed potatoes, vegetables, ham, and handmade cinnamon apples. Mark organized it all and it is definitely one of the more memorable Thanksgiving dinners I have had.

Left to right: Ardi, Mark, me, Arben (owner), Asdren (owner) and his girlfriend, Yll, and Vernon

Everyone pretty much laughed at the story how our forefathers ate “peacefully” with the Native Americans, but the 80c 2L of beer in the center of the table really washed everything down swimmingly.

A big shout out to our friends at Hostel Han in Pristina for keeping us entertained for over a month! And if you ever need a home base in Kosovo, we recommend this hostel as the only place to stay in the city center. You will come as a traveler and leave as a friend.